As we start this mid June week with new born coyote pups and their vigilant parents in our midst, a Coyote Primer for all of us to ingest with a reminder of the “Songdogs” survival instincts, curiosity, family values and habits

The Inside of a Coyote’s Den 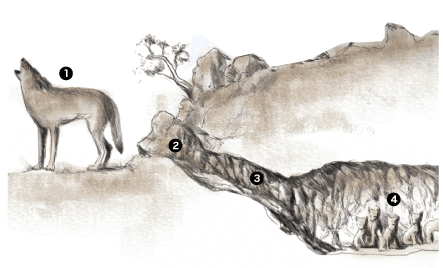 More and more coyotes are being spotted within urban areas of Southern California. Here’s a look at coyote dens.
The coyote’s den is used as a place to birth and nurse their pups. Most coyote families have several dens. The den is dug by both parents-to-be on sandy hillsides and steep banks. They may occupy a den previously used by badgers or foxes.
1) Communication is done with a howl, yelp or bark. Howling is a means of inviting females or to claim territory.  Yelping can be a sign of excitement or criticism among a small group of coyotes. Barking is heard when the coyote is threatened or protecting a den or a kill. Huffing is usually used for calling pups. (2) The entrance is often hidden by brush. (3) The tunnel leads to the chamber and may be from a few feet to 50 feet into the hillside. (4) The chamber is usually three to six feet below the surface; where the mother will nurse and protect her pups.
Before giving birth, the adults excavate one or more dens in the soil, occasionally expanding the burrows of other animals, but sometimes using hollow logs, rock piles, or culverts. Typically, even when denning in suburban areas, they choose sites where human activity is minimal. If disturbed, the parents may move the litter to an alternate den site.
———————————————————————————
http://www.ocregister.com/2017/06/07/how-high-a-fence-can-coyotes-jump/
How high a fence can coyotes jump?
Answer: 8 feet standing vertical jump!

SCALING FENCES: When searching for food in neighborhoods, coyotes are known to scale perimeter walls and fences. Coyotes can easily leap an 8-foot fence or wall. They have been spotted climbing over a 14-foot cyclone fence.
—————————————————————————————-
http://www.ocregister.com/2017/06/07/how-to-recognize-a-coyote-by-appearance-paw-prints/
How to recognize a coyote by appearance, paw prints
Although it resembles the larger wolf, it differs by keeping its tail between its legs when running. Foxes hold their tails straight out when running. 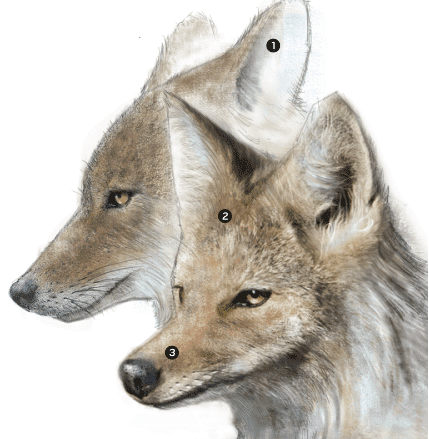 (1) Ears: Proportionately large in relation to the head. Hearing is acute and is used for detecting prey and avoiding danger. Movement and position of the ears are used to communicate mood and rank. (2) Fur: Varies from grayish-brown to yellowish-gray on the upper region and buff or white on the throat and belly. (3) Nose: The coyote’s sense of smell is highly developed and is used to detect prey, carrion and scent left by other coyotes as territorial markers.

——————————————————————————
http://www.ocregister.com/2017/06/07/how-can-we-control-coyote-reproduction-and-population/
How can we control coyote reproduction and population?
Coyote breeding occurs once annually, typically in late January and in February, with pups born in March and April. Parents and offspring continue to remain in a family group for about six months. Before giving birth, the adults excavate one or more dens in the soil, occasionally expanding the burrows of other animals, but sometimes using hollow logs, rock piles, or culverts. Typically, even when denning in suburban areas, they choose sites where human activity is minimal. If disturbed, the parents may move the litter to an alternate den site.

About 80 percent of coyotes live in families of three to seven. Efforts to control or exterminate the coyote population has produced an animal that is extremely alert and wary. Killing coyotes often results in just as many or more within a year or two.
Visit Rick Meril’s delightful blog:
http://coyotes-wolves-cougars.blogspot.com