The cow and yearling moose that inhabited my densely populated west Jackson neighborhood all winter finally wandered off to find a quieter place to enjoy the spring thaw. A few weeks later, I spied a couple of coyotes searching for voles in a field between subdivisions as sandhill cranes made their first appearance of the season. A fox crossed the road in front of me just yesterday. Wildlife who have made this place their home for millennia continue to persist despite the challenges that human development brings. Wildlife is what defines Wyoming and makes it exceptional. 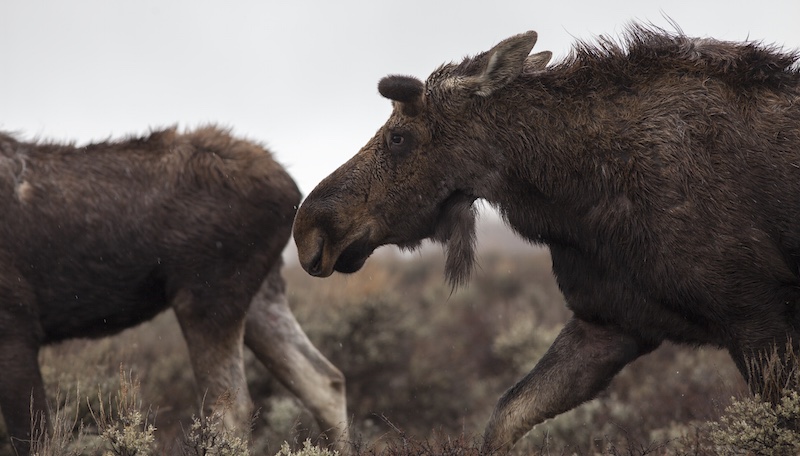 I first learned to hunt flushing sage grouse from the steppe near Saratoga. Nearly 40 percent of the world’s greater sage grouse live in Wyoming—a testament to our still relatively intact large landscapes—but even here, sage grouse and many other species dependent upon sage steppe habitat are on the decline, including mule deer and pronghorn. Despite considerable efforts, including Wyoming’s leadership in developing its Core Area strategy, we have yet to turn that around.

As shown by a growing body of peer-reviewed research, the cumulative impacts of sprawling housing patterns, roads, overgrazing, and energy development have limited the natural resiliency of the habitats wildlife need to survive. Add to that long-term drought and climate change and the future looks bleaker. Animals adapt—some better than others—but what is lost in the process?

Recent research indicates that at least some sage grouse are dependent on seasonal migration. At the same time, researchers are mapping routes that elk, pronghorn, and mule deer depend on to survive. And with that awareness, we can also see the challenges. Disease, human settlement, highways, fences, predation, forage competition, habitat disturbance, and fragmentation threaten migration for future generations. Are tomorrow’s populations of elk and mule deer destined to be like today’s big horn sheep—confined to small, geographically isolated herds, suffering from reduced genetic diversity, and struggling for survival? If elk no longer migrate up the south fork of the Shoshone into Yellowstone—preferring alfalfa fields instead—are they less wild? Are they less desirable as game? And are we humans poorer as a result?

What we think of as “wildlife management” is quite often really managing people and our impacts, or undoing the things we’ve done. The lake trout introduction in Yellowstone Lake reminds us that human actions—whether planned or not—often have unintended consequences. And correcting those consequences is both expensive and often ineffective. Too frequently, we fail to invest in research at a level that would better inform the decisions we make, and even when we do, we often ignore the findings. 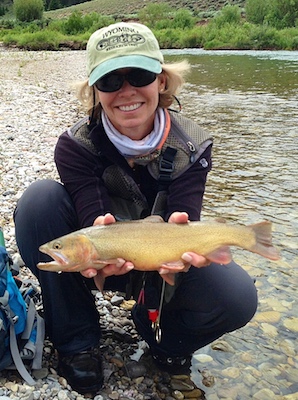 We mostly ask wildlife to accommodate us, rather than the other way around, but species decline is the clear result of this approach. The gap between what science tells us is necessary to protect wildlife and the policies we implement widens as the stakes grow higher. As a state, we lack the political will to actually protect the large landscapes that big game and other species depend on, and that make Wyoming truly unique.

Much of the $3 billion of Wyoming’s gross state economy that comes from tourism, hunting, and fishing is fueled by wildlife, and employs tens of thousands of people. Yet the state spends less than a tenth of one percent of that figure—a trifling few million in a good year—on wildlife research. If Wyoming were more like a company (and less like a company town), it would be out of business due to its failure to invest in the research and development that keeps its products exceptional. It would have failed to compete. Here, the best wildlife researchers are left scrambling for scarce private philanthropic funds, the Wyoming Game and Fish Department’s budget is woefully inadequate to fulfill its mission to conserve more than 800 species, and we have yet to have an honest discussion about what the state should be investing in this most valuable—and sustainable—resource.

If we consider our state’s wildlife as its most distinctive and irreplaceable natural resource blessing—as well as a significant source of our economy and cultural pride—we will be able to work together to maintain our diverse species, our healthy ecosystems, and a healthier and more diverse economy for the future. We will recognize wildlife as a steady, long-term economic engine rather than something to sacrifice for a fast buck in a boom and bust economy. We will invest in wildlife professionals, in research and analysis, in habitat conservation and restoration—and spend as wisely as we can. For our children’s children to have the opportunity to catch a cutthroat in summer, hunt a mule deer in fall, photograph a bison in winter, or see a sage grouse strut in spring, we must take the truly conservative approach and invest in the wildlife that will sustain us for generations to come.

A perspective from Elizabeth Storer, the President and CEO of the George B. Storer Foundation, a Wyoming-based charitable foundation that has supported wildlife conservation, community, and education programs throughout Wyoming for more than 30 years.