Environmental group is calling for B.C. government to change policy on bear hunting on North coast

There is more money in looking at bears than there is in shooting them — 12 times more to be exact, according to a new study.

The study conducted by the Centre for Responsible Tourism, a research institute at Stanford University in Washington, D.C., and funded by the conservation organization Tides Canada, concluded that bear-related ecotourism is exponentially more profitable than trophy hunting.

“We found that the bear viewing is generating 12 times more in visitor spending than is bear hunting, and over 11 times more in direct revenue for the B.C. province,” said lead researcher Martha Honey.

Ecotourism, including bear viewing, has grown rapidly over the past decade on B.C.’s Central Coast, said Honey. People from around the world come to the Great Bear Rainforest in the hopes of seeing black, grizzly and kermode bears in their natural habitat.

The report concluded trophy hunting, on the other hand, is on the decline, said Honey. 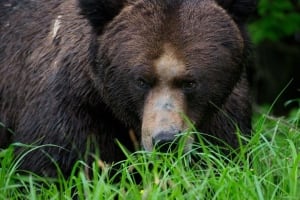 The Centre for Responsible Tourism is calling on the B.C. government to reconsider its hunting policies in light of these findings.

A comparison of the number of jobs generated by each industry also points to the need for a policy change, she said. Researchers found companies involved in bear viewing employed 510 people in 2012, while 11 people worked for guide outfitters in the same year.

Another concern, said Honey, is how much money the province is spending each year on complex hunting regulations.

“It seemed to us quite clear that the government is spending more to sort of manage and oversee hunting than it is earning from revenue from hunting,” she said.

But, a Ministry of Forests spokesperson said the ministry is disappointed in the report, claiming the study creates an artificial divide between bear viewing and hunting, which are not necessarily mutually exclusive activities.